Now For Something Completely Different

Amur leopards! I, frankly, didn't know there was a subspecies of leopard native to the same territory as the Amur tiger.

This subspecies is now limited to a region of southern Siberia near Vladivostok encroaching the borders of China and North Korea. Their natural range is inhibited by food availablilty and the severity of the harsh Siberian winters.

The last count of the surviving wild population estimated only 40 or so left. (Really sad, ed.)

This sub-species of leopard has a denser fur as an adaptation to survival in the colder climate of Siberia where winter tempertures can fall as low as -30�C.

Here are a couple of pics from the website linked to above. 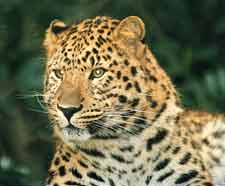 & dickface Bu$hCo is still President. The Decider won't decide in favor of these marvelous creatures.
Posted by coldH2O at 8:29 PM

Very nice! I found a place where you can
make some nice extra cash secret shopping. Just go to the site below
and put in your zip to see what's available in your area.
I made over $900 last month having fun!
make extra money