I read him several years ago. You ought to, as well. His work gives a good window into Arab life. That's something we all need right now. 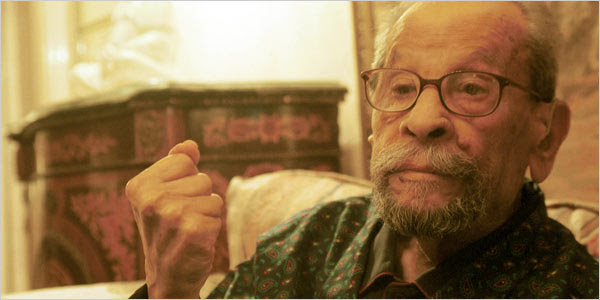 Mr. Mahfouz’s city was teeming Cairo, and his characters were its most ordinary people: civil servants and bureaucrats, grocers, shopkeepers, poor retirees, petty thieves and prostitutes, peasants and women brutalized by tradition, a people caught in the upheavals of a nation struggling through the 20th century.

Around their tangled lives, Mr. Mahfouz chronicled the development of modern Egypt, and over five decades wrote 33 novels, 13 anthologies of short stories, several plays and 30 screenplays. It was a body of work hailed by the Swedish Academy of Letters as “an Arabian narrative art that applies to all mankind.”

Mr. Mahfouz, a slender, modest, shy man who once described himself as “a fourth- or fifth-class writer,” was often called the Egyptian Balzac for his vivid frescoes of Cairenes and their social, political and religious dilemmas. Critics compared his richly detailed Cairo with the London of Charles Dickens, the Paris of Émile Zola and the St. Petersburg of Fyodor Dostoyevsky.