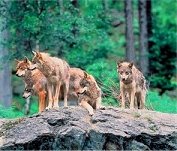 Good news for Europeans. See, I'm not an isolationist.

A century after they were wiped out by hunters and a burgeoning population, wolves have returned to parts of eastern Germany as factories close down, businesses fail and people move out.

A few dozen wolves have formed a beachhead in Germany's Brandenburg state just west of the border with Poland and enjoy special protection from authorities delighted by the return of the shy animals so deeply entrenched in German folklore.

It's a surprising comeback in one of the world's leading industrial nations where 82 million people are squeezed into a country the size of the U.S. state of Montana.

*These wolves are living in the Bavarian forest.
Posted by coldH2O at 9:55 PM

You put a great big smile on my face