A senior Justice Department official who helped carry out the dismissals of federal prosecutors said Friday he is resigning. Mike Elston, chief of staff to Deputy Attorney General Paul McNulty, is the fifth Justice official to leave after being linked to the dismissals of the prosecutors.

Five! What an honest bunch. & the reason he's resigning -

Elston was accused of threatening at least four of the eight fired U.S. attorneys to keep quiet about their ousters. In a statement Friday, the Justice Department said Elston was leaving voluntarily to take a job with an unnamed Washington-area law firm.

My emphasis. Via TPM. Via Atrios. 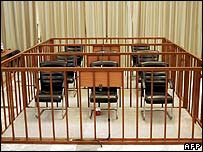