On a day when I saw my first ever wild Canvasback duck, a large, healthy drake - & of course, me without my camera. Where the hell was Shutterwi when I needed him? Probably doing something positive like fixing the extension cord that I separated using my chain saw. Anyway, this drake canvasback was sitting at the end of a very short breakwater. He was magnificent & as I approached he took off low & strong into a very brisk northeast wind. For those of you who aren't familiar with the big lake, a northeast wind is one hard, cold wind & any duck that can take off & fly like he did is some lovely duck. The canvasback is a great eating duck, but they are so rare that we are allowed to shot only one a day during our 60 day duck season. Since I have never even seen one before, although I did hear of one being shot a few years ago, I figure that the one bird per day is sort of a gift that is supposed to lift our spirits, & not something that is actually linked to reality. Here is a pic of a Canvasback. 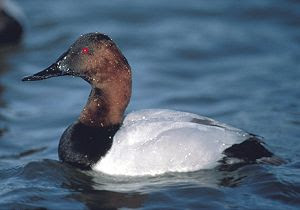 While I am still excited about the Canvasback sighting, I read in today's Times-Picayune from New Orleans this story about what Katrina did to the duck population in Lousiana. This information is being discovered a year & a half after that awful storm.

Some 30,000 ducks and birds used to winter in the marshes of the Bayou Sauvage National Wildlife Refuge -- indeed, their well-being was a principal reason that the vast refuge in eastern New Orleans was set up. But a glimpse at the area today makes clear why waterfowl populations have been down by 75 percent since Hurricane Katrina.

The storm robbed the refuge of more than 1,700 acres of marsh, and higher salinity levels have slowed the growth of vegetation and other edibles favored by the birds. The occasional cypress tree, left behind by loggers generations ago, is about all that stands in some marshy areas.

"The plants and food supply the ducks would normally find are not there," said Supervisory Park Ranger Byron Fortier. "One of the primary reasons why the refuge was created was as a wintering area for waterfowl."

congrats on the sighting! sad reality about the wildlife refuge....

"a lone bird...a possible breeder [Canvasback] in Wisconsin was seen on Rush Lake in Winnebago Co. on June 16, 1995."

"Robbins (1991) noted that the Canvasback has seldom bred in Wisconsin."