Ahead Of Their Time In Fashion

& now they are fossils.

The fossil specimen was a giant bird about five feet tall that had an exceptionally elongated beak with a grooved tip. Its estimated body mass was twice that of today’s emperor penguin, so it was one of the largest penguins that ever lived. The extinct species has been named Inkayacu paracasensis, meaning the water emperor from the Reserva Nacional de Paracus, the place in Peru where the fossils were uncovered. 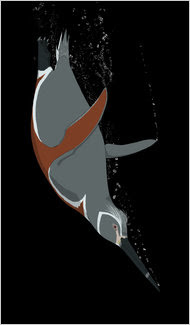 Another example of why science matters.