This Is What Happens When You Eat Overly Processed Food & Drive 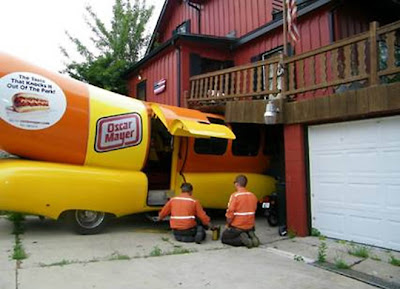 Via The Journal/Sentinel of Milwaukee, WI.
Posted by coldH2O at 12:15 PM

...Yes, she has lost it and revealed herself as flaky,delusional, dishonest, slightly paranoid and in way over her head. Palin should have never been elected governor. She wasn't ready and those of us who voted for her should have known it. The lesson is that personality, image and looks should never trump substance when evaluating a candidate. ...

It don't look good for Sarah. Maybe there will be a job opening up to drive the Wienermobile.

July 23 - received word that Sarah Palin will preside at some sort of picnic as Governor at the Alaska State Fairgrounds in Palmer about five miles down the road tomorrow afternoon.

Yours truly and SO will attend - Wonderdog Blackie will not be attending. We plan to assess Sarah's political situation and get some free stuff (this is a very socialist state).

Will add more tomorrow if Sarah does something interesting.