So today is Mardi Gras/Fat Tuesday. I've been reading some NOLA blogs &, damnit, I wish I was there. It is such a great time - music, food, liquor, & loads & loads of cool people. & you don't have to keep your tongue in your mouth when you are kissing people like I had to do today while celebrating a not quite authentic Mardi Gras in the coffeehouse, sans WiFi, with the demented, but still hot, owner; along with the hot bartistas & one totally hot lawyer who truly does put his pants on one leg at a time. I only went to the Vieux Carre/French Quarter once during Carnival & saw enough projectile vomiting to last me for awhile. We went to see Dr. John at the House of Blues on Decatur St. It was a great show & the Kid got his set list & his trumpet player's signature. I got pleasingly drunk & had a great time. I'm sad that I can not be there today/tonight/yesterday/last week/January for Christ's sake. But, as is becoming usual in the last 28, almost 29 years, The Kid pulls through & cheers me up. First by suggesting that we all set a goal of going to next year's Mardi Gras. & secondly, by posting some total cuteness on the blog Les Twins.
Mardi Gras Marigny 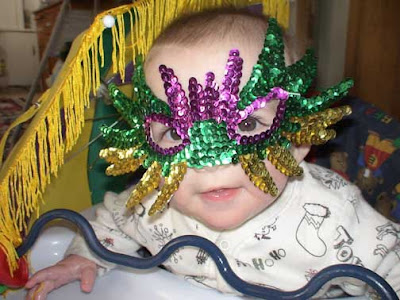 Throw me something, mister. 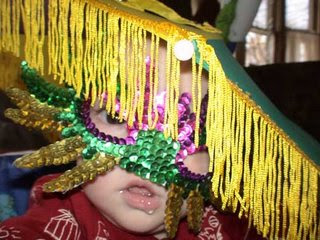 For those of my loyal four readers who are interested & you better be interested, here are some Mardi Gras facts via the French, we here at BillyCreek just loves the French.

Mardi gras takes place 46 days before Easter (le Pâques) - that is, sometime between 3 February and 9 March. Mardi gras is the day before Lent (le carême), which begins on Ash Wednesday (le mercredi des Cendres). The most famous Mardi gras celebration is held in New Orleans (la Nouvelle-Orléans), but many cities in Europe and South America also put on spectacular events.

Mardi gras is traditionally celebrated with a parade led by a captain, during which trinkets, or "throws," are tossed to the crowd. The parade is followed by a costume ball presided over by a king and queen.

There are a couple of related French expressions with the phrase Mardi gras:

Ce n'est pas mardi gras aujourd'hui - Literally, "today isn't mardi gras"; this expression is used to make fun of someone who is wearing something ridiculous.

& yes, it is true as The Son-in-Law will attest, I am a bead slut. I love the beads & want more of them.

Email ThisBlogThis!Share to TwitterShare to FacebookShare to Pinterest
Labels: Mardi Gras, My Sorry Ass, The Kid, The Son-in-law, The Twins