What's Really In Our Nation's Interest?

Someday I'd like to write a long post about what's in America's interest throughout the world. Someday. Today, however, I'd suggest that this is way more important than Iraq. But what do I know? Bu$hCo would rather kill people than help people. What a great country.

Five days after the powerful cyclone struck, this city, Myanmar’s commercial capital and until Saturday a verdant oasis of wide avenues, is far from back to normal.

Thousands of trees lie where they fell, jetties on the Yangon River have collapsed into the water and only a few traffic lights are working across the city of five million people.

Most of Yangon remains without electricity and even the local branch of the Ministry of Energy has no power.

The death toll in Yangon has been small compared with the devastation in the delta of the Irrawaddy River. The government counts fewer than 400 people killed here compared with the more than 22,000, and by some unofficial estimates possibly tens of thousands more, dead over all in Myanmar since the huge cyclone hit on Saturday.

But the inability of the government to clear debris and restore basic utilities like water and power in what is the country’s wealthiest city are a measure of how difficult Myanmar’s overall disaster recovery could be.

The answer is, apparently, blowing in the wind.

In another town, Labutta, which has virtually no food or fresh water, the flood waters have begun to recede, revealing rotting, bloated bodies, both human and animal, which have left a stench hanging over the town.

A distraught elderly woman in Kungyangon, lost 18 relatives who lived in a nearby coastal village.

Only three children at boarding school survived. “The whole village was destroyed,” she wailed as she pawed at their photographs and wept inconsolably. 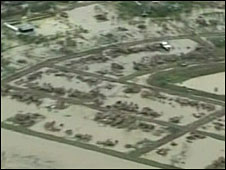 & Bu$hCo's pathetic initial response ought not surprise anyone. Plus the arrogance of unilateral on-site inspections.

He said the United States was looking at ways to augment an initial emergency contribution of $250,000 to the United Nations and other international relief agencies, but noted the process would be easier if U.S. experts were allowed to make onsite inspections.